I am a statue collector i have lots and lots of them.. (but not as many as i do has Transformers) so i had a birthday recently (yay happy birthday to me) and i got the Hulkbuster Iron Man Bust as well as one of the Three Packs showcasing Mr Starks Armor.. so here they are...
Hulkbuster Helmet Up

Awesome Awesome looking Statues when they are all together!!!

Decorations for your Phone....
Part of the Blockbuster Movie Merchandise Machine for the 2007 Movie these little "Danglers" appeared at K-mart Vending Machines, whilst not blind packaging like some of the other trading figures of the past you had no control over what dangler the machine spat out after it ate your $2 coin.
these are kinda cool totally worth the price you pay for them with a squishy rubber outer shell these little figures hide the plastic vehicle mode of the transformer character, give them a squeeze and out it comes... now why you would want to have them attached to you phone....

Pretty Simple. but then pretty cool at the same time. there is only 8 of them.

2003 was a big year for trading figures to come out of Japan, and The Worlds Smallest Transformers was the next to hit the market. Once Again these were Blind Packed Trading Figures, 3 series well technically 2.5 in total with an assortment of basic or common figures and the chase figures.. and just like the myclones i am missing a few of those pesky chase figure..

As you see wave 2.5 was mostly repacks of already released figures so i never doubled up on them, the two chase figures and Hot Rodimus were the only new additions. however the chase figures are still elusive.

And before you wonder, no i didn't reuses the case to take the class photo i do have a couple of those for various displays.

Super Deformed Transformery.
Back in 2003 those wonderful people at Takara released a couple of Transformer items under the Myclone brand, Super deformed poseable plastic figures which stand about 6cm high. AS-3 (Transformers Series 1) saw a January release with AS-4 (Transformers Series 2) released in March & AS-5 (Transformers Series 3) in July. That is all we saw of these little guys.
Each Series was Blind Packed, like trading cards, you don't know what you got until you opened it up, which is fun.. yet annoying at the same time. all three series came with 6 basic figures to collect with 2 harder to find chase figures mixed in. ( i am still unable to get my hands on the six various chase figures) 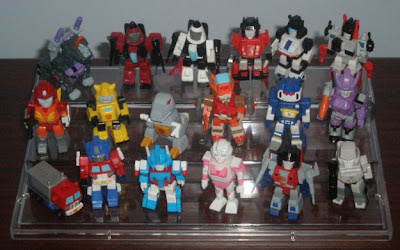 In the Class Photo Above we have:

The Display case is also a novel piece in itself, i imported this from singapore since it is designed for the purpose of displying these little trading figures, gives the set a little beat of neatness and protection from that nasty dust.

So anyone out there manages to see any or has some of the chase figures for sale drop me a line.

As mentioned somewhere around here, Transformers is perhaps my Core Collecting Obsession, but there are other items held within these walls, most notably from the Comic world, and then that is definitely a one sided affair, being a Marvel reader and all.


Marvel's Superhero Squad is one of those things that appeals to me in all its cuteness and quirkiness. These were basically a spin of of Hasbro's other cutey line of Star wars Figures Galactic Heroes (other lines such as Transformers: Robot Heroes and Indiana Jones: Adventure Heroes has since spawned)

The marvel guys have even got themselves a little club house to keep them safe from the super cute sentinel and world devouring Galactus.. although would take much to fill up Galactus. These guys have been broken up into the various movies that have been Released, Spider-man, Iron Man, Hulk But there is also a good selection of the rest of the Marvel U. Avengers, Xmen Fantastic 4 and there is more (lots more) to still come out in stores. 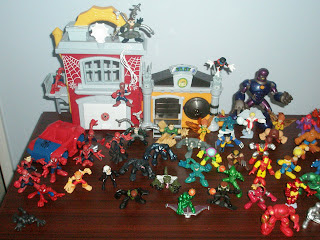 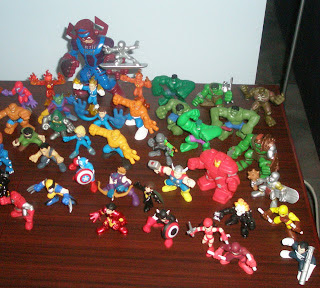 How Super is your squad??? Mine is currently 82 strong.

Now it may be surprising to some but i don't just collect transformers toys, i collect Transformers related Merchandise, Statues being one of the non toy Products. Hard Hero is an American based company that had the license to manufacture "non transforming " transformer related products. basically statues.. cold-cast porcelain kind. they made a series of busts and full sized versions of the Gen 1 Characters, they even managed one for the Beast Wars. Unfortunately the licence wasn't renewed and we never saw many more after Rhinox. It was a shame, what appealed to me well besides the fact these were essentially he first High end collectible statue for transformers, but the fact that they captured the simplistic cartoon designs of the character. 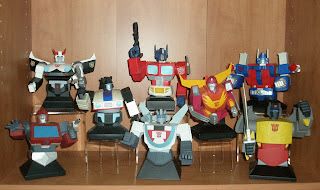 Hard Hero managed to put of 14 Busts. (16 if you include the metallic painted versions of Shockwave and cyclonus). A simple Bust collection when you look at them, not alot of detail but then easily identifiable with the cartoon of old. Prime was the first Hard hero released, and he is my Favorite Autobot bust i own, That includes all the newer version but out by Diamond.

Starscream has his trademark Smirk and Devastator is a heavy statue pretty much twice the size of the other standard busts, pretty fitting i thought since he is supposed to be a combiner. 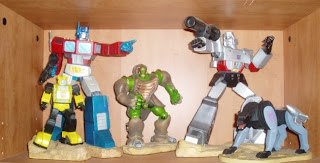 To mix up the busts there were some full sized.. well not literally full sized. full sized as in the busts have legs.... Ravage was marked as "1st in the Cassette Series" but alas he was the only one, a side effect of the un-renewed license we didn't get to see more, just like Rhinox. an absolute awesome looking version of the Beast Wars character, he set a high standard, but we never saw the next one (which was supposed to be waspinator) Disappointing. together the statues look pretty good as a group almost looking like a Small diorama. Optimus and Megatron sending both their pets into battle..bumblebee and ravage both had "mettlic variants" as well.

The Insecticons also got the statue treatment. not quite the size of the megatron and optimus but larger then the busts. Th make a nice three piece set.

Above: Kickback, Shrapnel and Bombshell 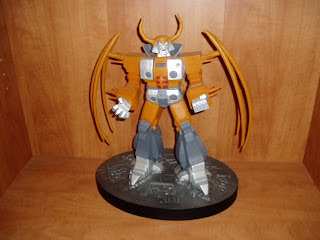 Originally a Botcon 2002 Exclusive (no i didn't attend it, my local comic shop managed to get one in) Unicron stands around 406mm high (that's 16 inches to any one reading that doesn't use metric) it is a big statue and a nice statue make sure it stands on something solid though because its also a fragile Statue, I'm petrified that one of the prongs on his wings or his hands will snap off.

So the pictures above is pretty much every transformer related Statue Hard Hero managed to release (that doesn't include the 4 metallic Variants) that is 23 Hard Hero Statues. 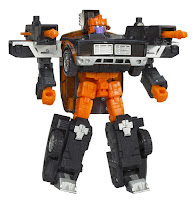 Series: Movie Line
Size: Deluxe
Release: April-May In Australia
Price: AU$26.95
Initially this guy was to be a Walmart Store Exclusive in the USA. but since i dint live in the US and there is no Walmart's over here, Big Daddy along with the other three in the Excl. Wave found themselves on Target shelves recently.

Now those that know me, know I'm not a huge fan of repaints, and although my collection may be littered with them, i do buy the odd few. As most that will read this or care about this know Big Daddy is not a new Mould, he is a repaint of Cybertron Downshift. This is my reason for picking it up, i liked the Cybertron Version of this mould, it was an easy Transformation for a Deluxe Sized Vehicle but it was all round just a nice figure.

Big Daddy the name is also not original it was plucked from the 1990 Micromaster Member of the Hot Rod Patrol, so in simple terms
G1 MM Name & Colours + Cybertron Downshift = Movie Big Daddy. 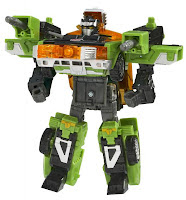 I love a homage just as much as any other Collector from the 80's and what the managed to do was make a pretty good figure a better looking figure. Now It definitely was not the name that made me get this figure, its simply was the fact i like the mould and the black and orange flames on the car looked 100 times better then the green Cybertron version. Not only that coming from the cybertron line the Cyber Key Gimmick that was the Cyberron line is very well hidden in this Mould, so it doesn't interfere with anything on the figure in vehicle or Robot mode.. its nicely hidden away. and lets not forget his head still looks like Wheeljack

The Figure itself has limited articulation compared to some of the movie toys, No waist Movement a slight head turn, Good shoulder and Knee Movement. The Cyber Key Gimmick does still work, and the Missile launchers are Shoulder mounted or Hand Held. So My Reasoning to Get This Figure was Pure Aesthetics.. i just liked the way it looked. Big Daddy does also look a little out of place compared to the rest of the Movie Bots, he doesn't have that fake detail design most had to show the complexity of the robot.
So if you can't tell already i Liked this Figure Not only for the homage but for how good it looks. Most definitely worth adding to a collection.
8/10 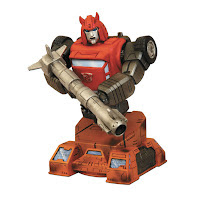 CLIFFJUMPER
Released April 2008
Sculpted By: Art Asylum
0283/1000
Finally a Cliffjumper that isn't just a Bumblebee Repaint. the Seventh (not including exclusives) Bust to come out of Diamond Select Toys branch of the world sees a character that doesn't get much 3D Love (apart from the before mention BBee repaints). Mr Jumper Carries That Honking Great Big Gun from the Cartoon.. you remember that ep when he lines up megatron in his sights and misses......
THE STATUE
Standing at around 112mm Cliffjumper shares the same teletran-1 style base that Bumblebee had, even down to the "stats" of the VW Bug on the monitor on the rear. I really do like the size of the minibots (not to mention the price!) they are at least kept to some sort of scale especially comparing to Grimlock which seems to be the larger of the statues . And just like Bumblebee there is no assembly required he is a one piece Statue. The back of Cliffjumper even shares a similar design to bumblebee... but that is where the similarities end. the rest of him as all brand spanking new Cliffjumper. I would like to see DST do more minibots especially the first year guys, Brawn, Huffer Gears and Windcharger. with the Mini Bot size it would make a good mini collection.
THE VERDICT
Like all DST products you really need to be careful of Quality, the statue i managed to get has a small brush stroke of a different colour on his forearm where it looks like the painter missed, and then there is the common problem i think with all the DST Transformers Statues. The poor sculpting of the mouths. it just looks slightly odd.. but they are tiny negatives on a whole. I really like the fact that it really is a Cliffjumper body and Head to go along with the Red Paint job. Bonus Points for the Gun...

from the twisted madness this place LIVES!!!!
Posted by Steve at 6:05 PM No comments: