After Beast Wars, in the year 2000 Beast Machines hit out TV Screens and Toy Shelves, last year (2010) I had a bit of a beastly bug and I Managed to track down the figures I was missing from this series and there were a few of them, most of which never saw a release in Australia.

So after a good effort on eBay not to mention a missing package containing a MISB Magmatron and then the seller going missing himself no to mention the help fellow transformer collectors I managed finished this series off (and for the most part rid my system of that beastly bug...for now)
﻿﻿


Now i Must admit these guys were not the prettiest looking figures out there with a large amount of Translucent plastic used, alot of them feel fragile and some are just terible figures (Supreme Cheetor im looking at you!!)

I would really like to re-photograph this part of my collection.. i think i squased the figures in to much and you do not get to see them that well 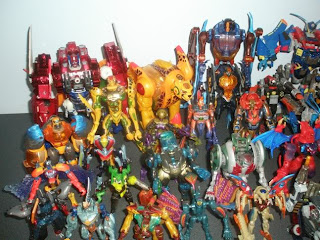 Blast Punch Optimus Primal is one of my favorites from this series, aside from being the most show acurate version he is a solid figure. 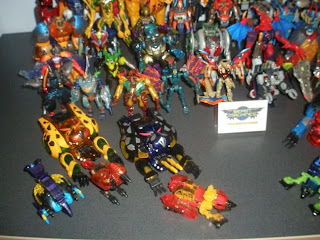 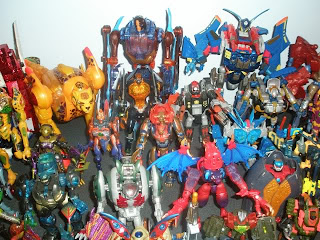 Nightscream is one figure that would of benefitted from actually being a smaller sized figure... the lasrge "Ultra" sized figure is just ugly and looks out of place 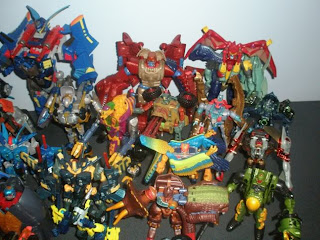 Magmatron is a neat figure combined, and was the hardest figure for me to obtain at a good price anyway 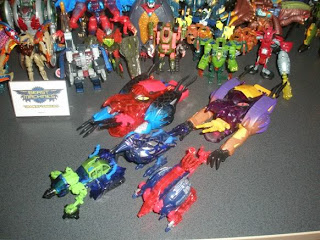 the beast riders i picked up for dirt cheap i think the most expensive one cost me $6.00 for a MOSC version...
52 Figures make up this completed series of toys
Posted by Steve at 12:46 PM 2 comments:

Email ThisBlogThis!Share to TwitterShare to FacebookShare to Pinterest
Labels: Transformers 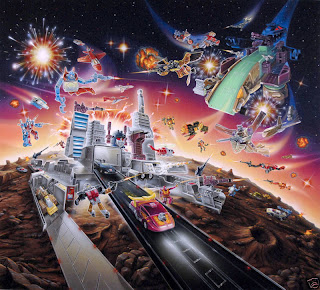 The Third Series to hit Toy Shelves came with a Movie on the Big Screen where we saw the Death of Optimus the Rise of Rodimus and Megatron had a change of body...(and name)
Joining the "Movie Cast" this year we saw a step up in the gestallts with the introduction of 5 new teams to the war.
Defensor was the first gestalt i ever completed (and only gestalt i completed growing up) so this guy is one of my favorites, But in recent years Predaking has had the limelight with a couple of Re-Issues including the "Gold" 2010 edition (not realy gold but the yellow parts on the original were cast a gold colour) 3 Predakings Grace my Collection taking the title of the most of one gestalt i own..... Also transformers were getting bigger with the likes of the city bots metroplex and trypticon!! So behold my year three Tf's!!!
﻿﻿
﻿ ﻿ ﻿﻿ 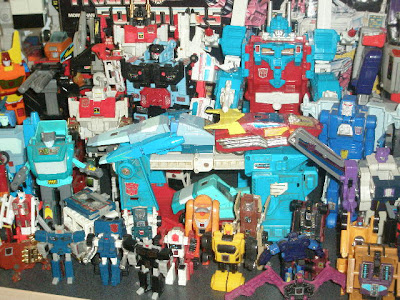 A couple of Magnii and Autobot Minibots
﻿﻿ ﻿﻿
A Whole Bunch of Predacons, Trypticon and the rest of the 'cons
﻿ ﻿
Kup, Metroplex, Octane (D-72 version) Cyclonus and Galvatron..i wuld like to add a MIB/MISB Scourge to that collection oneday, over 70 transformers in my collection this year
Posted by Steve at 12:12 AM 2 comments:

Time to show of some more of the Main Collection,

just like the first year this lot is also riddled with multiple figures. something that is a little more costly due to the size of some of the figures in this series.

The year of the dinobots.. those 5 toys were just awesome. my favourite of the year sludge was the first i ever got... he was also the first transformer i ever broke... but he was fixed.. and replaced... 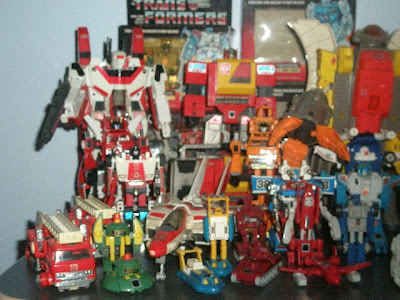 Jetfire was another awesome toy of my childhood, probably because he was the first "large" toy i got. 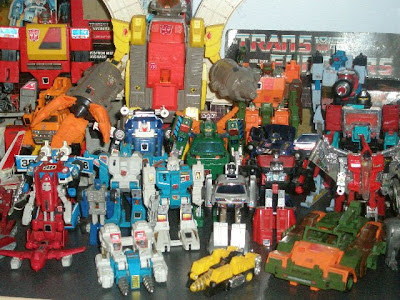 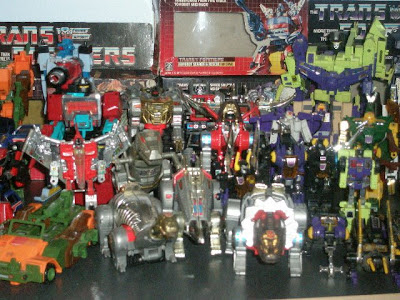 Me Grimlock Badass!! well so he think.. Grimlock, Swoop, Sludge, Snarl, Slag and we finally get to the bad guys for this series Triplechangers Astrotrain and Blitzwing, Insecticons: Bombshell Shrapnel and kickback, The Combined form of the Constructicons Devestator, Barrage a "Deluxe Insecticon" and a lonely Scrapper. 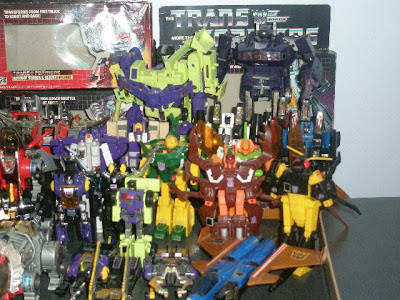 And Finally the remaining D'cons, More Deluxe Insects Chopshop Venom Ransack, Seekers Ramjet Thrust and Dirge and logic dictates the remaining one is Shockwave (the purpley one eyed one up the back) 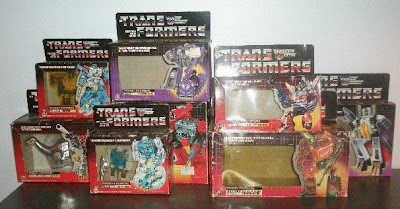 Here is some of the packaging for bots, sludge and topspin still being sealed in all the 1985 freshness.. although top spin doesn't look like he has fared that well..

So that is that for the second year of "Generation 1" 64 odd figures there.
Posted by Steve at 7:49 PM 3 comments: 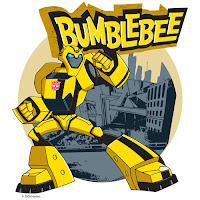 In 2008 a new style of animation came from the transformers world... and with that they were able to capture that style into toy form, out of all the modern day toys, this is my favorite line i just like the simple look of the characters and the toys just have a great feel to them
So behold the glory that is my Transformer Animated Collection!! 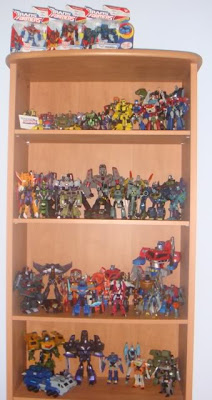 A temporary Set up for the figures as they do not have a set place do be displayed...Yet!


These are some Activators i have not gotten around to opening yet.
- Armor Up Optimus
- Fireblast Grimlock
- Soundwave

Decepticons
With the awesomness that is LUGNUT!! 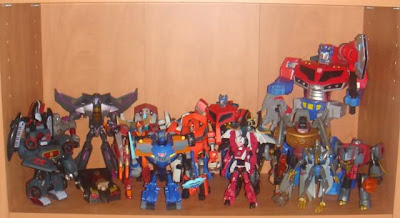 and a Slightly Empty Shelf with what is left..