Those that do know me, know I collect toys (and Sports Memorabilia).. and I have alot of toys (and Sports Memorabilia), I think the official terminology is "lots and lots" under the universal counting structure. so one of the purposes of this bloggy thingy besides posting my reviews for whatever I post reviews on I will take you on a tour of all the bits and pieces I have sitting around. Transformers and Transformers Merchandise, are the primary focus of my collection, but there is also Marvel, Masters of the Universe and various other bits and pieces from the TV comic and movie world.

As you can probably tell.. or even relate to I am most definitely a child of the 80's, even tho i was born back when Elvis was alive i did my growing up in the 80's. so that had a HUUUUGE influence on me... but the collecting probably didn't really start until I had a full time job and a discovery of eBay. Even then it was an odd purchase here or there. It was probably around 2003 when i shattered my leg and was laid up for a fair while, then the collecting became a distraction from the various lets say inconveniences thrown my way.

This was the first year of the Transformers Brand, a cartoon on TV and a bunch of toys on the shelf, but they weren't just a toy... they were 2 toys... a robot. and a vehicle or object. and that there was the fascination with them, you have this car, plane, gun etc that could actually change shape and fight the evil Barbie or the bad guy that was forever invading the bedroom fortress.


There were 28 figures released this first year, the good Guy Autobots outnumbering the Evil Decepticons 18 : 10 my First was the Autobot Leader Optimus Prime a present for my 7th Birthday. so it was all down hill from there.. i managed to score Skywarp and Ratchet from the birthday money.

As you can see in the above Piccy, one of each figure is not enough. sometimes two isn't enough. is it overkill maybe, but then these things are pushing 25 years old. so constantly transforming them may prove to be fatal at some stage its always good to have a spare, or two. 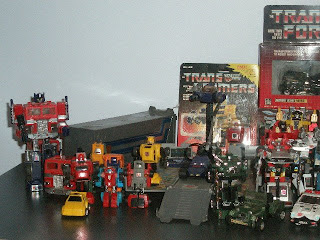 Optimus has always been a favourite of mine, the two pictured are not all the 1984 primes i own, i have another two yet i still have not manage to get my hands on a 1984 boxed version. its on my list of things to get. 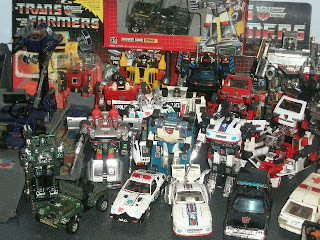 As mentioned a little higher up Ratchet was the second TF i ever got i have no idea why i chose him, Hound and Jazz are perhaps my favorite of the cars yet they were one i never owned growing up. 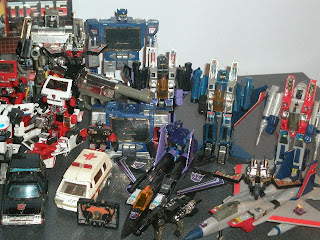 The Funny thing with Megatron, he was never for sale here in New South Wales, he was barred due to his likeness to a real gun, which some fool in Queensland held up a bank with.. so he was a hard to get my hands on figure. and it wasn't until much later that i did get him.


But wait there's more... only a little bit anyway sometimes, not always i came across some figures still in the boxes some sealed some not so sealed but still a very nice looking piece to have on the shelf. below you can see the Red Bumblebee Variant (missing the mini spy), Prowl, Hound and Trailbreaker. 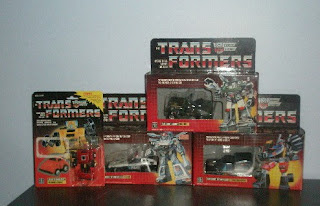 So that concludes this little virtual tour, the first of many (many, many, many) more to come i have never fully counted my collection but there are 42 figures in the pictures for those playing at home.
Posted by Steve at 9:12 PM 5 comments:

i am going to revamp this little place and showcase my collection in more details. keep an eye out.
Posted by Steve at 10:45 AM No comments: