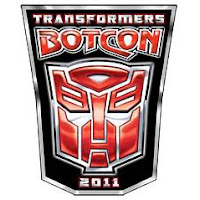 
My First Aquisition for the year manages to eliminate an item of my 2011 Hit List. Botcon 2011 is the first time if decided to get this series of exclusives, mostly because i like the way the Animated toy line kept the cartoon look and managed to make some pretty nifty toys, and these "expanded universe" characters fit into the toyline nicley!!

So Allow me to Introduce Botcon 2011 Sideswipe and Fisitron: 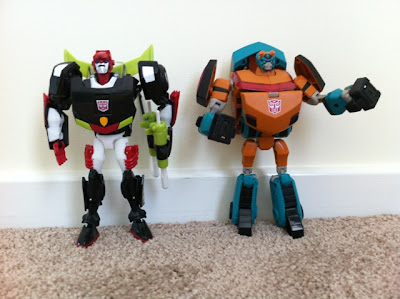 This mould is one of my favorites in the Animated Toy line and a nice redeo here for TFCC Cheetor to Partner up with after the story in the Convention Comic. Aslo a nice Homage to G2 Sideswipe
Fisitron

LSOTW has alot to do with this characters popularity... a good re-use of the ironhide/ratched mould.
Both these figures are a great addition to the Animated portion of my collection..

A Big Thanks to Sky Shadow from OTCA for selling these to me and knocking a few more bots of the Missing List﻿
Posted by Steve at 12:59 PM No comments: